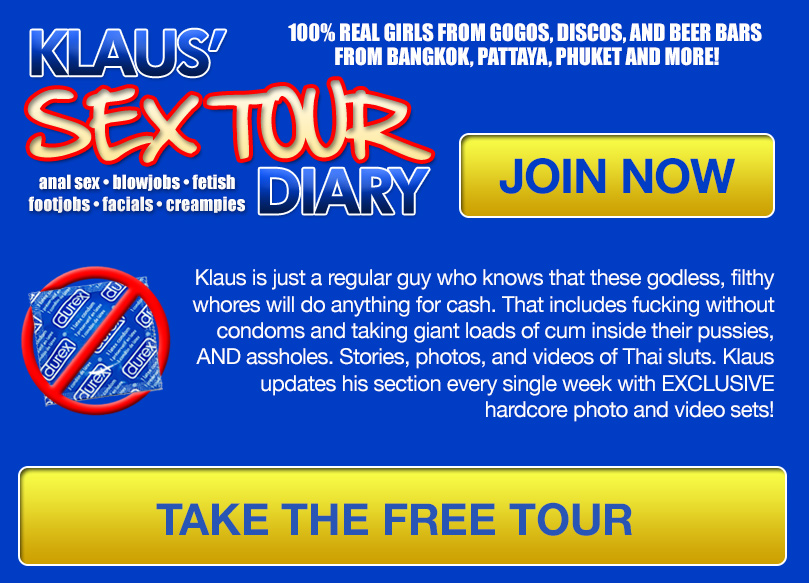 Pik's tits were the first thing that caught my eye. She's not the prettiest girl but does have an odd look to her that made her stand out. Not to mention Pik seemed way into me and chemistry always helps. Pik is 21 and blessed with a great ass and a world-class grinder as she rubs her gogo ass against my lap. While she bounced on my lap I fed her tequilas while playing with her connecting tits. A few drinks later I paid her barfine for ST and she changed into her clothes. Pik came out dressed in a long girlfriend dress that showed off her long slim frame. Even though she had a baby Pik looked great. The first short time hotel we went to was fully booked with other mongers fucking the brains out of their short time dates so went to the next. Happily there was a room available and went right to it with Pik. When the door closed I raised her dress and dropped her panties. Pik tried to play shy, even after finger fucking her in the gogo. I wasn't buying this for a second and had my way with this silly whore. After making her pussy wet I told Pik to blow me. She declined, saying she never gives guys blowjobs. Not the best thing to hear out of a whores mouth. With that I bent her over and slipped my bare cock inside her mommy box. Pik was wet, but has one of those gaping pussies that are HUGE when excited. With slight exaggeration I could whip around my hips and make my cock spin like a helicopter inside her. All without it touching any of her insides. Pik was lazily watching a crappy Thai drama on tv while I banged her. The noise of the show, and the noisiness of the hallways of the short time hotel didn't make for the perfect storm of sexual bliss. I banged into Pik's sloppy big cunt but needed more inspiration. I flipped Pik onto her back to fuck her missionary. That way I could enjoy those tits while plowing her bareback box. Pinning down her legs I fucked Pik fast and looked at her small, grimacing face. That was enough for me and I blew a jizz load all over her easy shaved cunt. Pik went to the toilet to piss and shower. We kissed, dressed and went on our separate ways back into the Pattaya night.